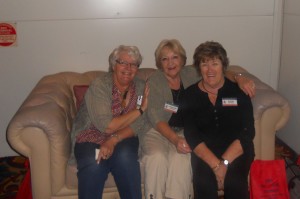 The Reunion officially started, as planned, at 6.00pm on Monday 23 April with the Meet and Greet in the Southern Cross Pavilion at the Royal on the Park. All Reunion Souvenir bags (Cap, Stubbie Holder, OFP Association Badges, Name Tags, Maps of Brisbane and the Reunion Itinerary) lined up on one wall in alphabetical order with George Crowes Art display on another wall.

Tony Flanagan, Reunion Co-ordinator, introduced his new wife to the gathering. At 6.00pm it was buy your own and at 7.00pm $1000-00 was put on the bar and when the money ran out it was back to pay as you go. By 9.00pm most had left the room and headed off either to the Hotel Bar or their Hotel Rooms

On Tuesday 24 April we all strolled dow 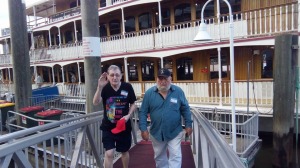 n to catch our Kookaburra Queen Showboat Cruise at 11.00am which was a River Cruise and Lunch. Unfortunately Bob Nash was unable to come as he had to attend his old High School to deliver a Eulogy for a fallen class mate (LT John Fraser – 3RAR) who was killed in Vietnam 50 years earlier. At 3.30pm we returned to Port and strolled back to the Royal on Park to ready ourselves for the Reunion Dinner Dance commencing at 6.00pm at the Arvo and Bristol Rooms. 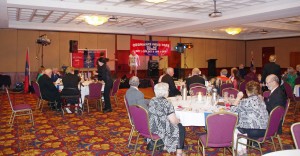 On arrival at the function room our ladies were presented with their corsages.

Tony welcomed all and read out a list of apologies as follows:

Tony had a group of family who came as his dinner guests;
Marjorie Hill, her Daughter Janette Hooson and son Robert Hill and his partner Ms Jennelle Sharpe

Tony then read out a list of those who had passed on since our 2016 Reunion in Albury:

Greg Tyler (Dets 1 and 6 OFP 13-12-66 to 26-8-1967)
John Faram (1 OFP 26-8-1967 to 27 -8-1969) The Association did send condolences to John’s family and a small group of OFP members attended the funeral
Rod Watts (1 OFP 19-8-70 to 2-6-71)
The late Amy Chambers, wife of deceased Jack Chambers who unfortunately was unable to attended a Reunion but Amy made up for him attending at least five Reunions with her friend Suzy Baines.
Winky Lowry the late partner of Eddie Place and son Tom who was at the Reunion representing Winky

Tony then took the opportunity to warn Greg Quinlan (Dets 1 & 6 OFP and all the way from the USA) about the way we spell toilets in Australia (Remember Albury???). As Ladies meaning Ladies (females) and Gents means Gentleman

The meals started at 6.30pm and about 7.30pm another $1000.00 was put on the bar for free drinks until 8.30pm. Meanwhile the Rock Band, Atmosphere, took the stage at 8.00pm and the dance floor was rarely empty. Good old Rock and Roll from the 60/70s hard to beat and of course to end the evening, The Animals favourite 1965 hit of Vietnam Vets WE GOTTA GET OUT OF THIS PLACE 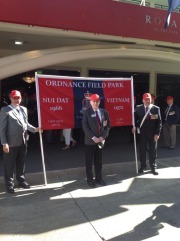 At 9.30am we formed up outside the front of Royal on the Park to sort out our Flag and Banner carriers and have pics taken by those interested. Our unit stood out with all wearing Coats and Unit ties and our new RED coloured Reunion Caps. We were led by Alan Davis followed by Peter Mc Farlane and Laurie Burt carrying the Unit Banner with Bill Dobson and Barry Siddons carrying the Australian National Flag and the Royal Australian Army Ordnance Corps Flag. As in past ANZAC Day Parades the OFP marched as a smartly dressed unit full of unit pride. This year our position in the Parade was Number 21. Only problem is in that position you miss the rest of the Parade and finish too early. Pubs and Hotel Function centres have the same problem serving Alcohol before 1.00pm in Queensland. We will try organize that better in Tasmania.

The ANZAC Day luncheon commenced at 12.30pm but unfortunately we had no more money in the kitty for free drinks. Tony welcomed Denise Koch to the Reunion although she did attend The Meet and Greet on the Monday evening. He also praised our two officers who have attended most of our Reunions all over Australia Retired Lt Col Alan and Cindy Davis from WA and Major Garry Downs from Canberra. He also thanked our senior couples Lawrie and Val O’Neill for still attending in their mid-80s. It was also great to see a much improved mobile Dot Meppom enjoying the reunion. The staff were paraded before us and thanked for their efforts during our reunion. A letter has been sent to management to congratulate all who participated with a special mention to Katelyn who ran the dinner and lunch.
At 3.45pm there was a mass exodus to the Public Bar for a change of beer and to watch the AFL match between The Collingwood Magpies and The Essendon Bombers. Bill Dobson lost again to Ian Maclean.
At this stage we were joined by 17 young men (over 40s) who had just completed the Dawn Service in New Guinea at the end of their Kokoda Trail Expedition. They were buying us beers for our service and we were buying in return for their courage to take Kokoda Trail on and we finished the night when the bar closed at 10.00pm.

Next time we will try to get a TV into the ANZAC Day luncheon room but without sound for those who are interested. The most pleasing thing about this Reunion was all States were represented as were all years served from beginning to end. The ladies all got their pics of their men standing alongside their mates. The next Reunion will be held in Launceston Tasmania over a four day period so start saving your money and stay healthy. We have been lucky with accommodation for this Reunion but expect the unexpected.
Hoping to see you all there and my prediction very wrong.

Our numbers were down for our Brisbane Reunion but, with over fifty apologies received, we are hoping for a bigger turnout for Launceston.

A very big thanks to Bob Nash who really ensured it was another great Reunion.